This doll isn’t a new doll to the collecting world. This doll was released around February/March of 2016. If you’ve been reading my blog for any length of time you know that I love two things: blondes and bows. This doll checks both of those boxes. When I thought I might want to dip my toe into the Barbie Fashion Model Collection/Silkstones, I thought this would be a perfect doll to start. Unfortunately, as she was one of the first (if not the first?) Silkstones to feature an articulated body, she was no longer available on the barbie.com website, although her Brunette sister is still available. I found a listing on eBay and here she is! The 2016 Barbie Fashion Model Collection Classic Black Dress Blonde! 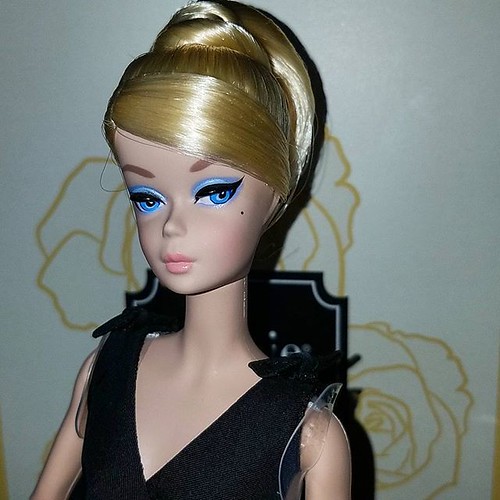 I should note that the coloring on all of my photos is off. She has that classic Barbie platinum blonde hair. It isn’t yellow blonde at all. I couldn’t get my photos to cooperate with that, though. 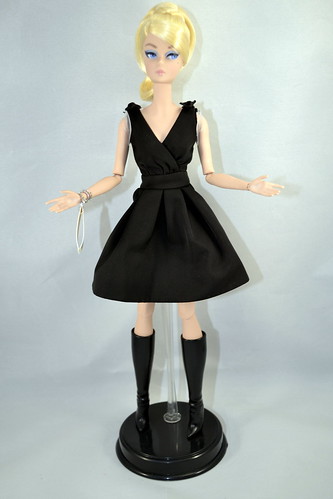 The doll herself is a HEAVY doll. When I took her out of the box I was very surprised at how more heavy she is than any playline doll I’ve ever held. She doesn’t FEEL like a “normal” Barbie. I have no idea what she is made of, but it is heavier and feels of higher quality than normal doll plastic. She also doesn’t have that plastic smell that most dolls do (I’m super weird and like that smell, though). 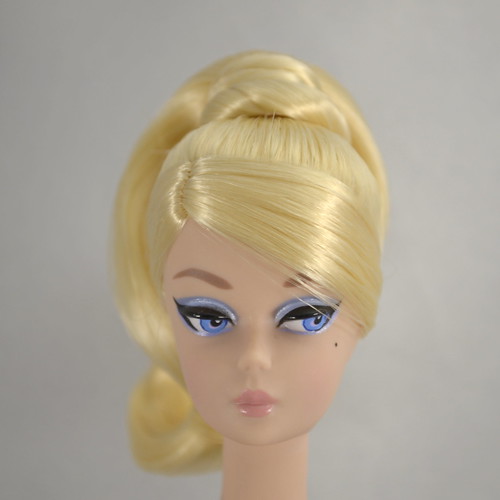 Her face features side-glancing blue eyes, light blue eyeshadow with black liner and pale pink lips. Look at her brows! I’m just in love with her face. And her little beauty mark! This looks like a girl that you don’t cross. Love it! 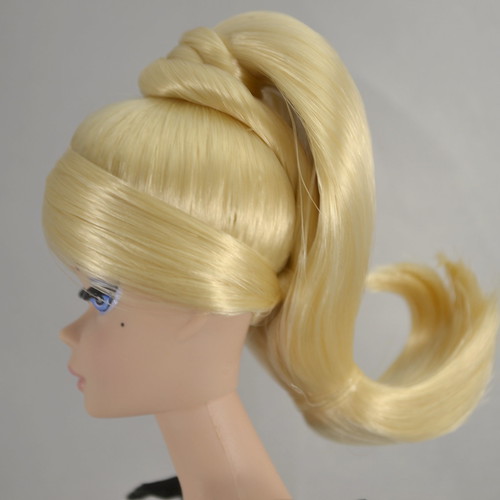 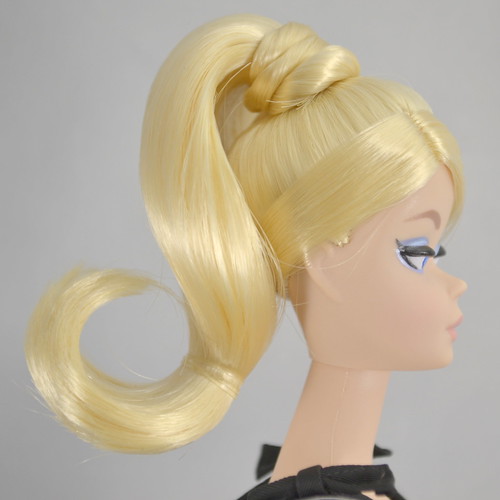 Barbie is wearing her hair in a ponytail with fringe pulled around to the back. She has several strands of hair surrounding her ponytail holder and another band at the bottom. There is a small amount of hair-styling product to maintain that back curl/flip. I’m loving all this detail in such a simple hairdo. You see none of the rooting lines or ponytail holder. 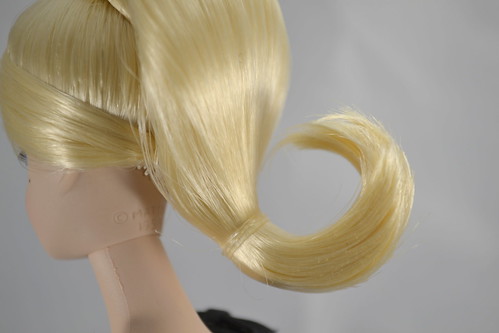 I’m pretty sure that elastic was supposed to come out after I deboxed her, but I kinda like that it keeps her hair together rather than it splaying out. I love a good ponytail! 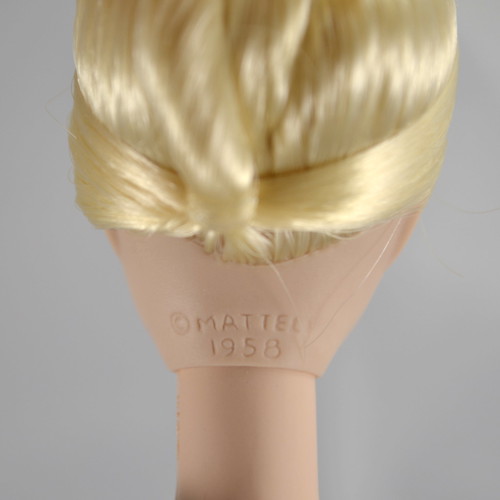 The head mold was copyrighted in 1958 which is why she has that nostalgic feel. 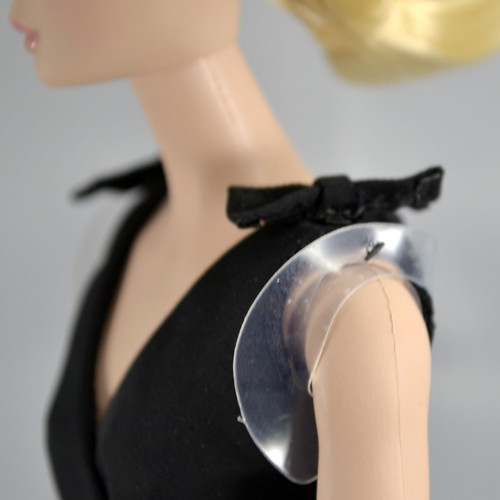 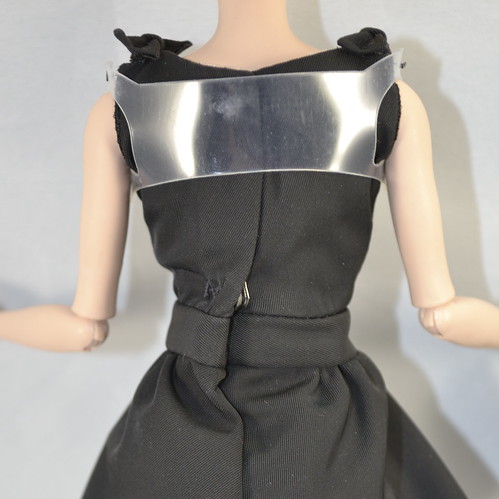 Like any good collector quality doll, she came packaged with some precautions. I’m not sure the purpose of this bit of plastic, though. I THINK it may be to ensure that the black fabric of her dress cannot touch her arms and stain them. It was attached to the dress with tiny plastic bits that easily detached. 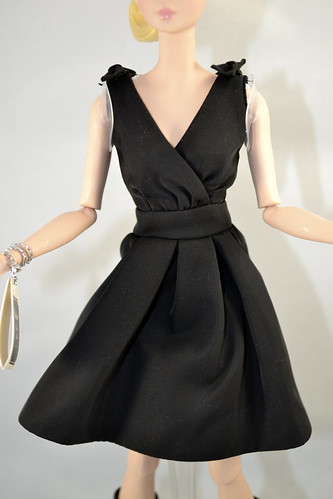 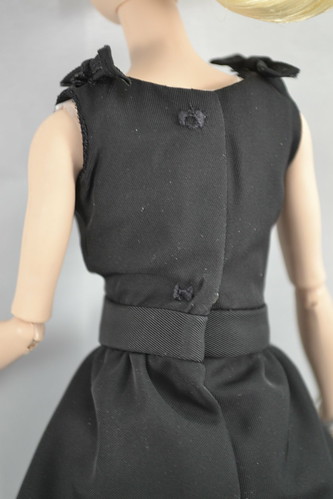 As her name is her dress, I think it’s important to talk about this. The doll was originally a $40 doll. You guys….. what have I been doing with my $40 all this time? The dress is of the HIGHEST quality! The fabric is super soft and it is lined. I can’t tell you how adorable this thing is! And look at those little bows on the shoulders! I closes in the back with two small metal snaps. It’s amazing how such a simple little dress that is SO soft can make me so happy. 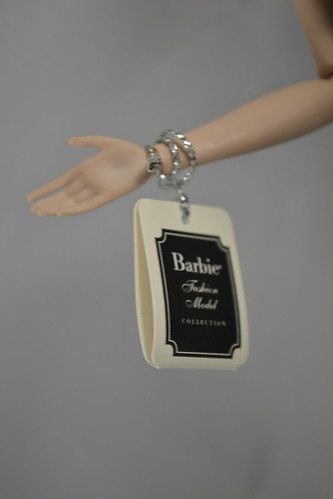 Each Barbie Fashion Model doll comes with this little tag attached to her right wrist. I think I’ll leave it for now. It’ll probably go bye-bye later, though. 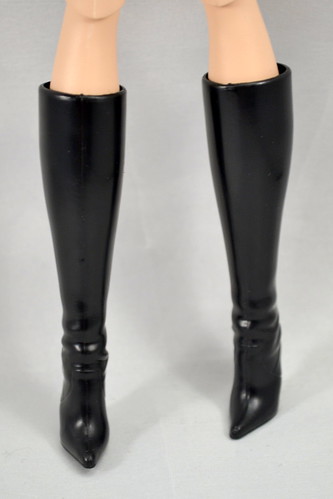 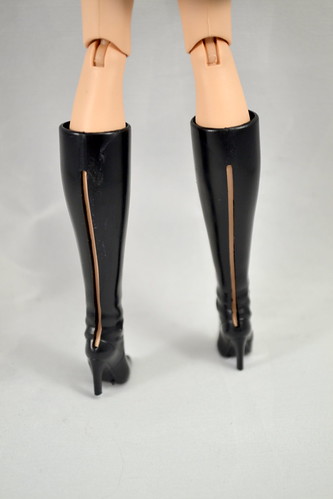 The boots are split in the back to aid in their removal, but the split does not go all the way. I’m pleased with this feature because the boots maintain their structural integrity, but you also get the functional piece of being able to remove them. 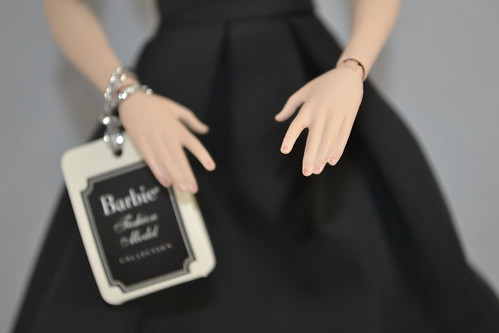 This doll wears a nice light pink nail polish on all of her little fingers. 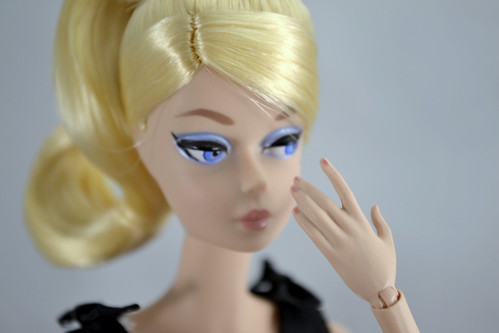 Because she is articulated, I can show you that this color matches her lipstick. I think that’s a common theme in this line of dolls. I am NOT a high fashion lady, but I guess matching your lips to your nails is a thing? Get it girl! 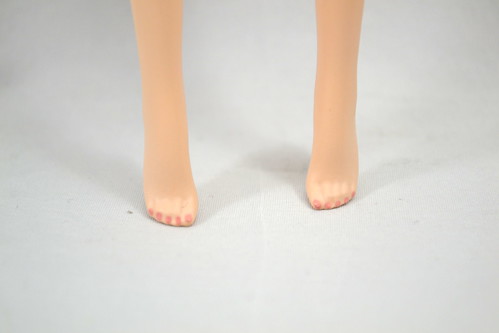 Her pedicure under those boots also matches. This is SUCH a nice detail that very few people will see because of those boots, yet they did it anyway! Love it! 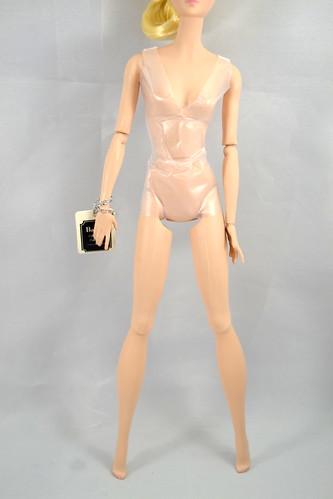 On to that body! The doll came packaged with plastic around her torso in the shape of the dress. I love little details like this! As I will probably be leaving her in that black dress for a long time, I haven’t removed this plastic. You can also tell that she doesn’t wear any panties. Another feature to protect the body? Or just a gutsy girl going commando? 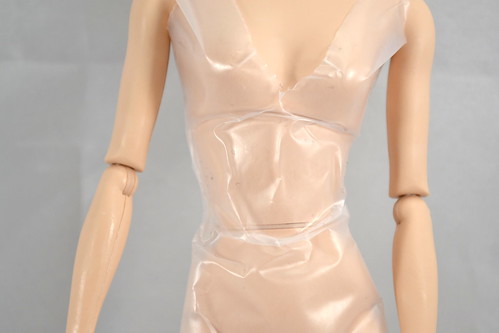 The Poseable Silkstone body has the points of articulation that I love to see in a playline doll like elbows, wrists, shoulders, hips, and knees. She also features a joint under her bust that allows her to tilt like I have her here. Unexpectedly, there is a joint at the waist that allows for rotation. I know this joint was common on the older (vintage) dolls, but seeing it here with all the other joints was interesting. 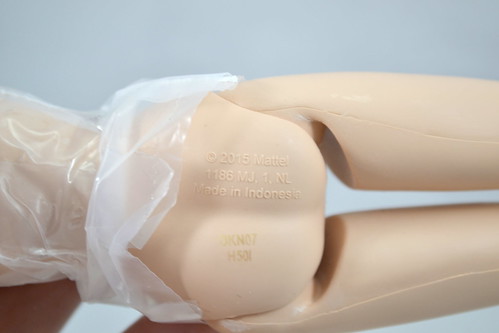 The head may have a 1958 copyright, but the body is brand new. Well… 2015. That’s new. This poseable Silkstone body has some fans and some critics. You know us doll collectors are an opinionated and loud bunch. This is my first doll, so I’m new to this collector’s world, and I’ve already heard several opinions on it. I love some good articulation, so I don’t have a reason to dislike it yet. 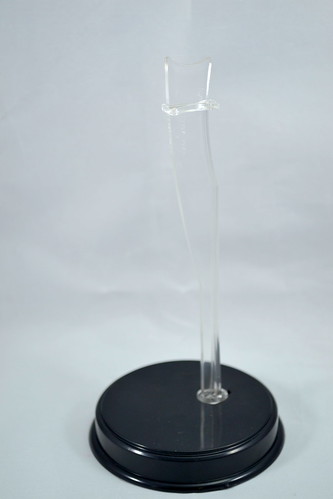 Now the stand. That I have a reason to dislike. I love when dolls come with stands. I think it is a must for a collector-style doll. We want to show these beauties off. So why am I complaining? 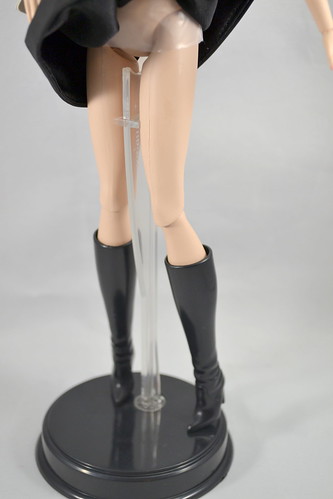 It doesn’t fit her! The saddle part of the stand comes nowhere near her body. Those boots aren’t that thick. I have to be SUPER careful when I move her around. She’s heavier than I’m used to anyways, add to that that most of the mass is above that saddle part of the stand that doesn’t actually function. I’ve heard of collectors using Integrity doll stands. I might have to look into that.

And that’s Classic Black Dress Blonde Barbie! I wanted a newer less expensive doll to start my Fashion Model Collection to see if I really liked it. And I do! I really do! I realize all dolls in this collection are not $40 and that this is a very deep rabbit hole I find myself in. That being said, she will not be the last. I already posted that I’ve purchased another, this time straight from Mattel. I can’t wait to see what the future holds for this line as well as getting some of the ones I’ve missed.

What do you think of the Barbie Fashion Model Collection/the Silkstones? Had you even heard of them before now? What was/is your impression? Are there any on your wishlist?