Hey everyone! It’s about time for new dolls! I announced earlier this week that Toot’s Toys had some of the new Epic Winter dolls shipping out. I jumped at the chance to get this new Blondie, and I would love to share her with you! 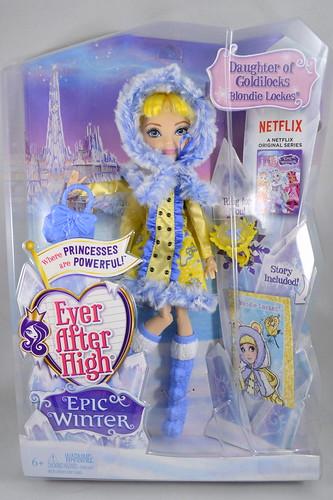 Let’s talk first about what you see when you get this box. Blondie is packaged in the new Epic Winter box. It looks almost like a block of ice. 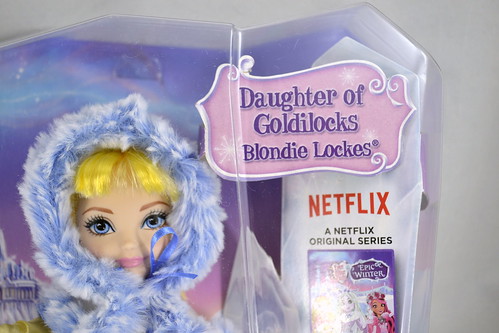 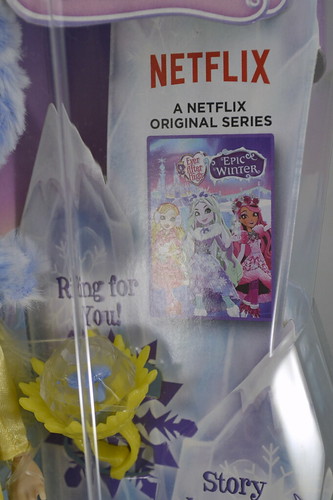 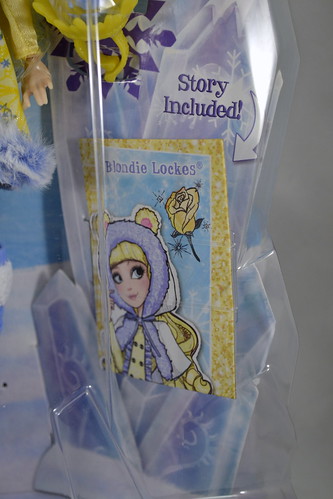 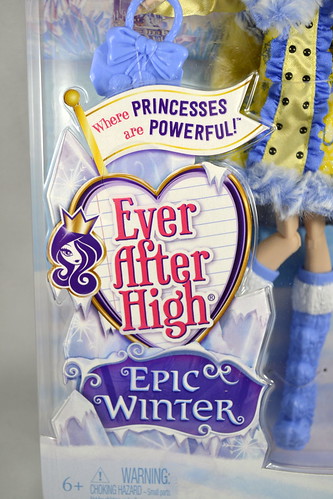 The cover of the new Epic Winter movie can be seen on the box, as well as a Ring for You!, a Blondie Lockes card that promises a Story Included! and the new logo. 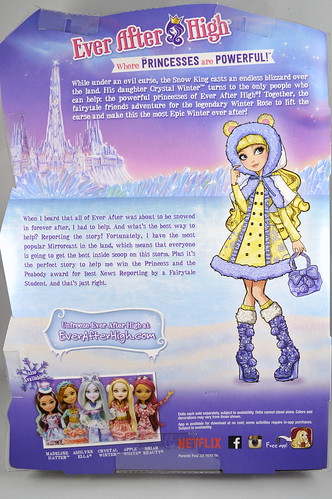 The back of the box tells more of the Epic Winter story and just why Blondie is included in this set: 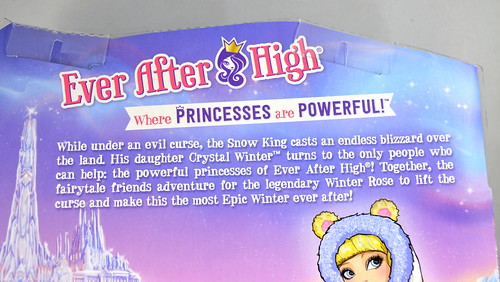 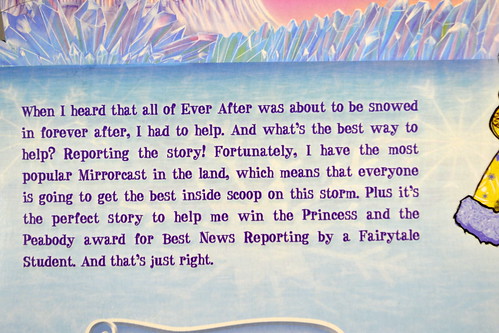 Photos of other dolls available in this set are also included. These were obviously prototype dolls, because the actual dolls have the new smiling faces. 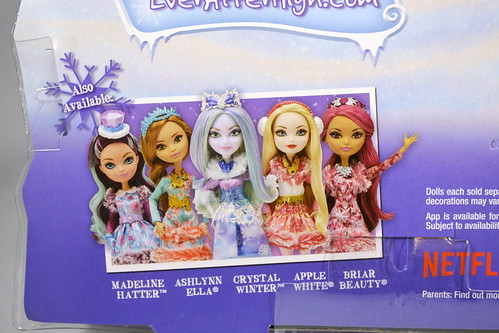 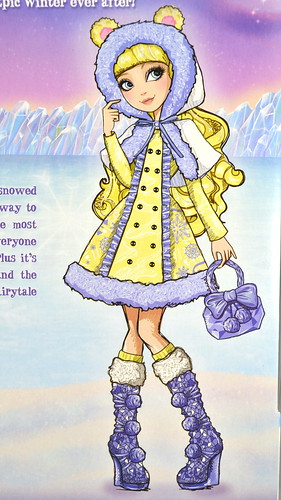 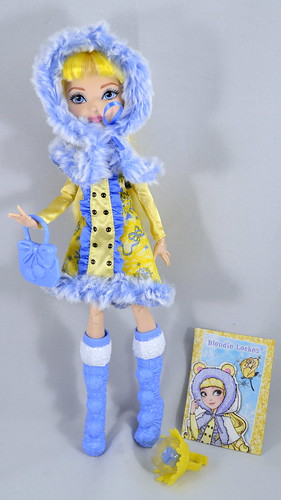 Here is Blondie with everything she comes with. Did you notice? There is no stand! Ugh. Missed opportunity. I’m assuming these are the deluxe dolls for the new movie? And no stand? You could have totally done an adorable ice/blocky style for the stands. Or just give me a normal one. 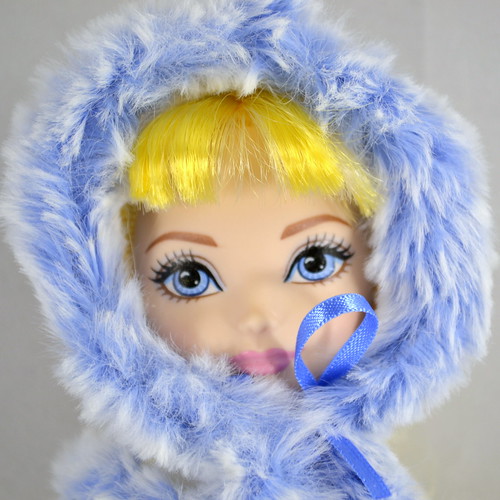 Blondie comes with this cute white hood with blue/white fur trim. This, added to the ribbon that ties it, makes it hard to see her face in the box sometimes. 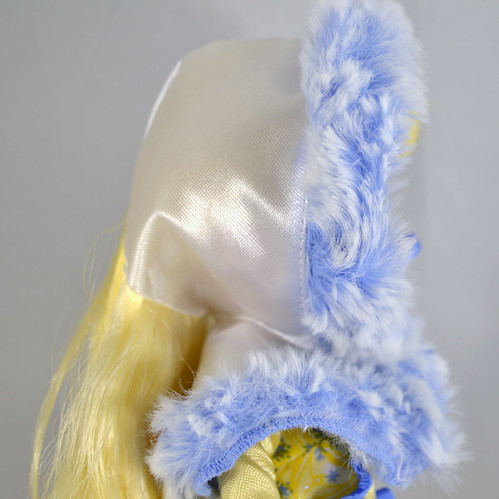 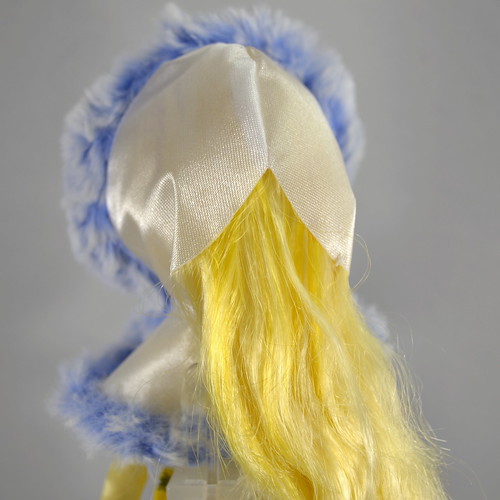 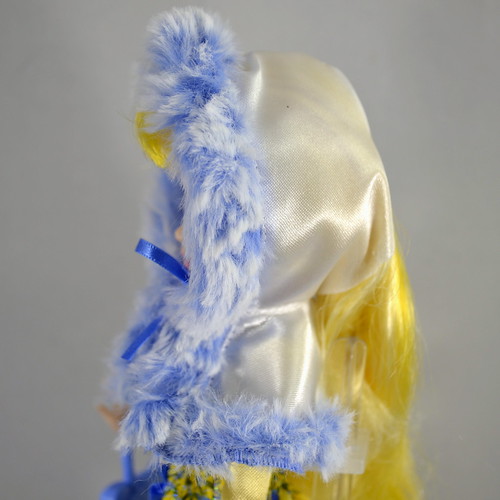 The hood has a hole in the back so that her hair can fit through. 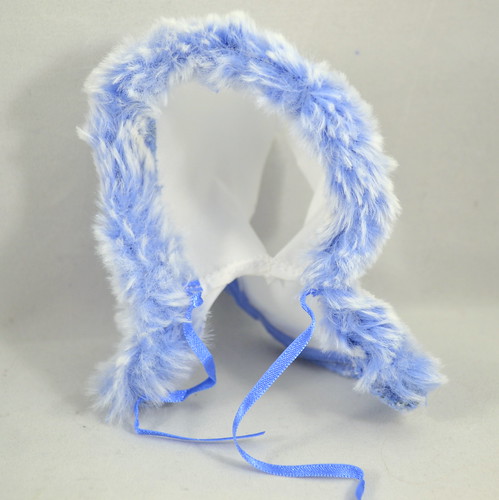 Since we got so few accessories with this doll, I’d better photograph what we did get. The hood is cute. It’s also a HUGE disappointment. Did you see that art? Let me remind you: 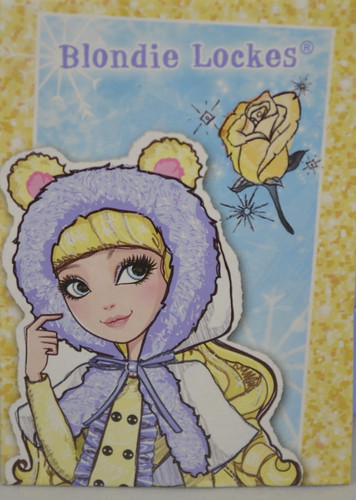 Do you see it now? Where are our cute ears!? We already get cheap fabric for the hood and no stand, but we don’t even get the cute ears! 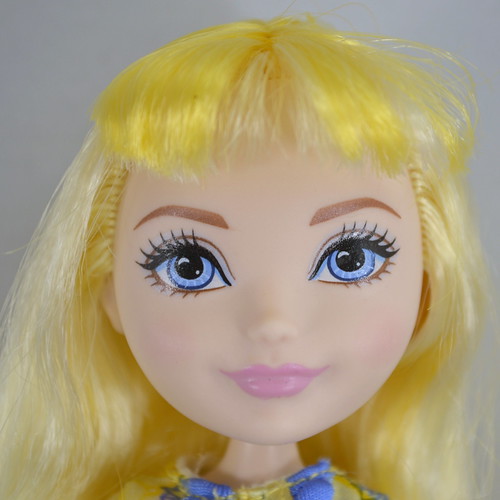 And did you notice anything else about this girl? Her eyes are so far from straight, it isn’t even funny. The great people at Toot’s Toys let me pick from multiple photos, but they said none of the dolls really looked all that good. In the right light you can even see where her eye was supposed to be printed….. but no. This seems to be a common problem with Blondie, though. I have a Signature doll that also has this problem. That eye on my right (the doll’s left) just doesn’t seem to ever print like the other one.
Enough complaining. This Blondie has brown bottom eyeliner and lashes with brown eyebrows. She has a very faint blush. I can’t really tell if there is eyeshadow there or not. Maybe?
Oh! and the big thing! Look at her smile! I’m actually a fan of mixing it up a little bit and including the expressions on the dolls. 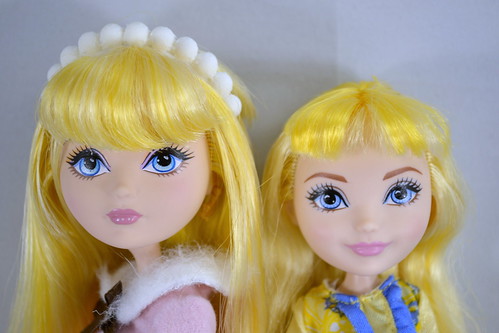 I mean look! The Signature doll just looks so mad in comparison.
(P.S. this new doll isn’t really shorter, her head was just jammed down on her neck and I didn’t notice.) 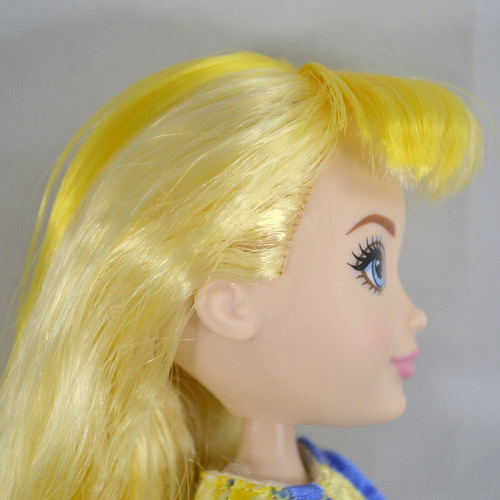 Blondie wears no earrings. You may not be able to see it in the photos, but her hair is so sparse. It’s bad enough for me to complain about it. I mean, I know, I know, it’s supposed to fit under that hood, so you don’t really want a lot of hair to have to fit in there…. but what if I want to take that hood off? There isn’t really enough hair there to make a cute hairstyle. *sigh* 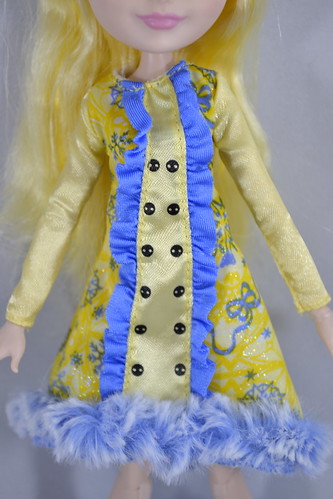 Blondie’s dress is kinda cute. It is all yellow with long sleeves and a yellow strip down the front. It has blue ruffles coming off of that strip. The other fabric has details that are printed on. The fabric is that cheap feeling stiff fabric. It might be because of the glitter…. 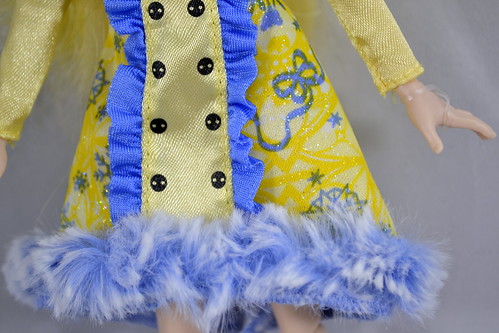 It might be easier to see that glitter here. I’m getting spoiled with the clothes I buy on Etsy. This dress would be much cuter if the skirt portion was much more full. The trim is the same color as the hood, and that’s the most adorable part of it.
I know the movie is about this EPIC cold that comes through, like in Frozen, but this dress would be much more cute with short sleeves. I mean, it’s already above the knee. It isn’t really keeping her from freezing to death.
Oh! And I guess it’s worth noting. There are bows printed there

The other items are all various snowflakes. 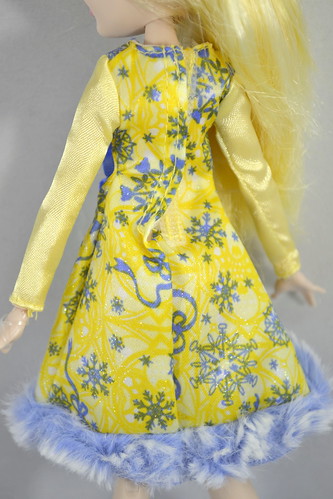 The dress is all one piece. It could use a belt, I think. This is one of my least favorite outfits that Blondie has ever worn. 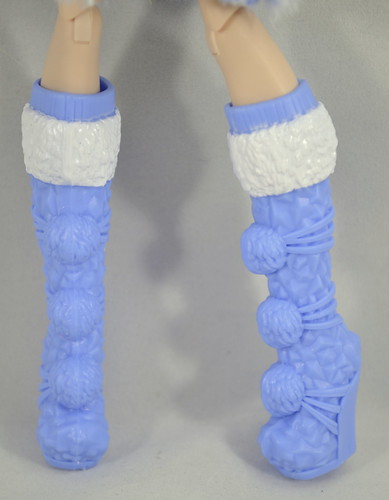 Blondie is the only Epic Winter doll (that I know of) that does NOT have molded/painted tights. See! She’s going to freeze to death anyways. Just give her a cute short-sleeved dress so she can freeze in style.
Her boots have cute little pom poms (that should have been painted… ugh) and this frozen/ice blocky pattern on the boot. There is a painted fur cuff at the top, at least. 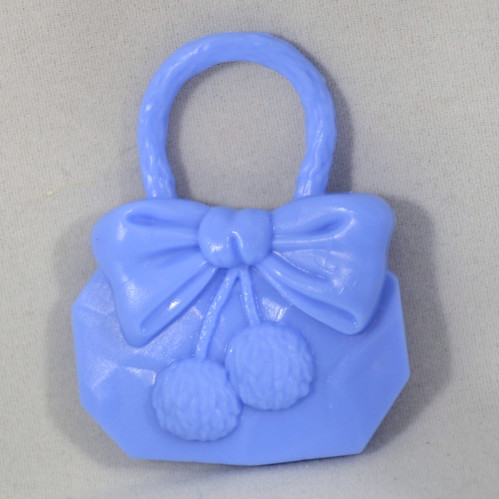 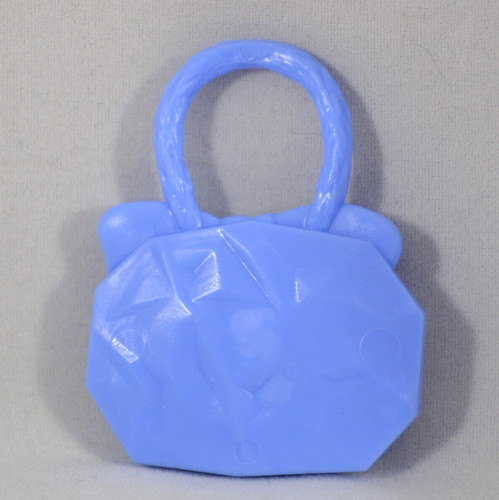 Her one real accessory is the block of plastic in the shape of a purse. It doesn’t open and is not painted. But hey! There is a bow on it! So at least there is something….. 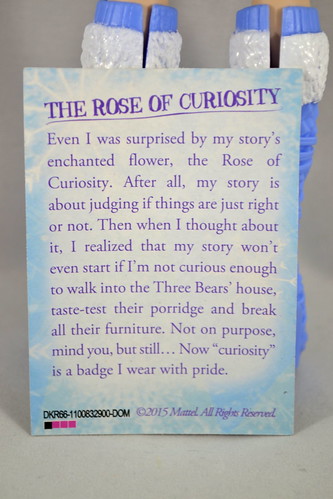 The other side of the card with the art features her “story.” Which is really just a card that doesn’t open. It tells about the Rose of Curiosity, which is her story’s enchanted flower. What is an enchanted flower? I guess we’ll have to watch the movie to see…. 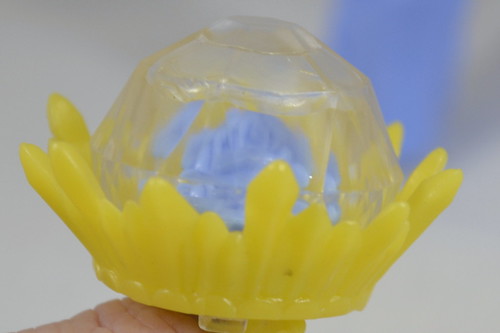 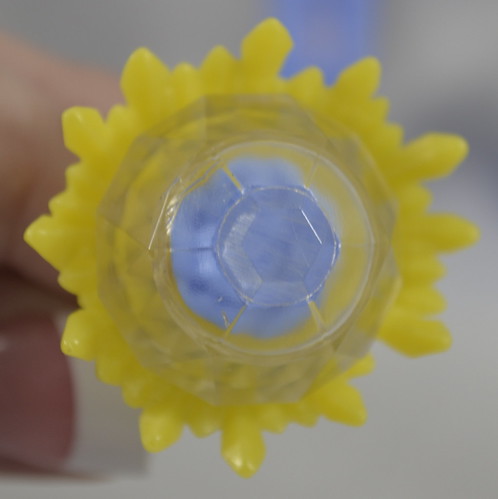 You get this ring for you. It is adjustable and can fit comfortably midway down my finger. I’m assuming that bit of blue inside is the Rose of Curiosity?

And that’s Blondie!
I haven’t bought a new Ever After High doll since.. what? Dragon Games? Or was it the three new signatures (Justine/Farrah/Melody)? I can’t remember. In that time off, I’ve been purchasing various high-end dolls. I think I’m tainted. I just expect so much joy when I open a new doll and get to explore all she comes with. This doll just didn’t bring that same joy. She’s a Blondie and her face is cute, but there is just so much more that I want. Let me make a list…
#1.) Straight eyes!
#2.) The ears on the hood
#3.) More hair
#4.) A dress that feels less plastic
#5.) Some detailing on those boots
…. I could probably keep going, but you get the idea. This doll left me looking more like the Signature doll, and less like the smiling Epic Winter doll…. 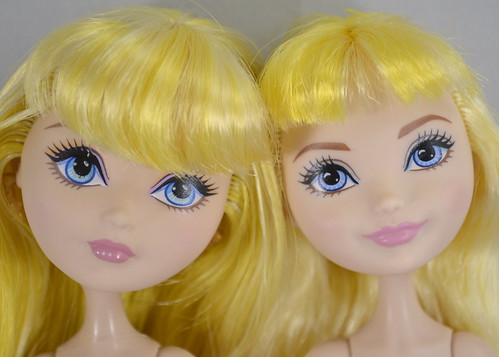 What about you? Will you be adding any Epic Winter dolls to your collection? Do these quality issues concern you? Or have you gotten so used to them that they won’t matter? Leave me a comment and let me know!