This may just be because I’m a nerd, I will own my title, but I am SUPER excited about the concept of these dolls! I’m talking about a line of dolls from Madame Alexander called the Fan Girl Dolls. The first was a convention exclusive, the Black Panther doll. 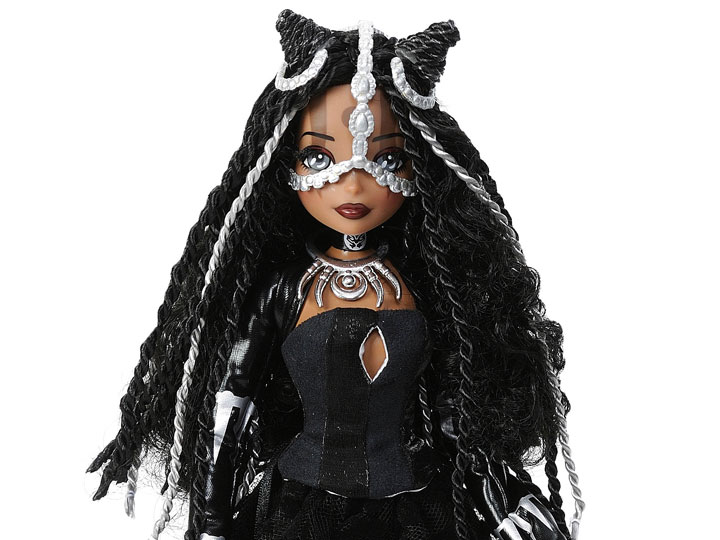 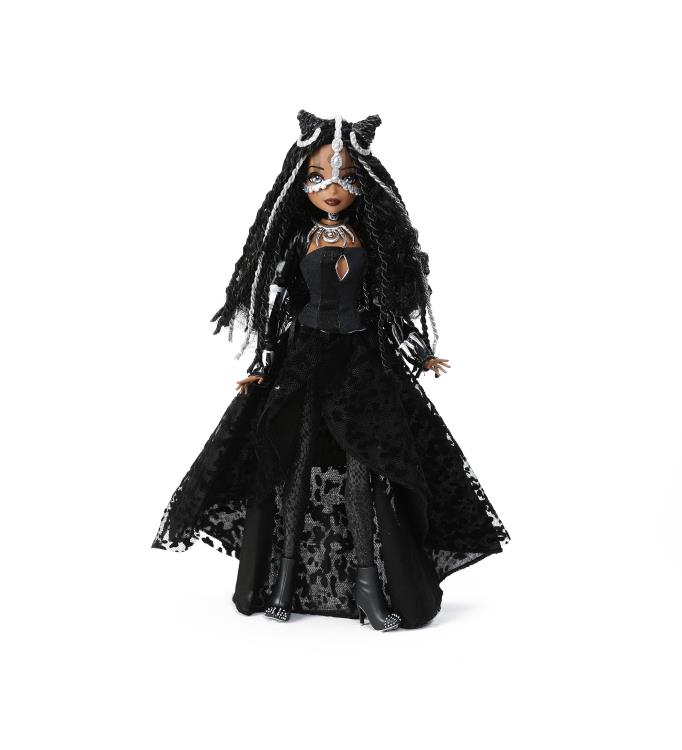 There is a larger line of dolls that can be found at https://www.madamealexander.com/fan-girl/

These dolls are on sale for $49.99 each. That’s a high price tag, I hope the quality comes with that.
The first doll I found was the Iron Man inspired doll which can be found for presale at the toysrus website.

The next doll is the Captain America doll. Available for pre-order here

Then is the Black Widow doll. Pre-order link right here

And I’m saving the best for last: SPIDER GWEN! Don’t you all go buying this one out from under me, but here’s her link, too

I’m really in love with the Spider Gwen doll, but I am torn on pre-ordering them. I think I remember several of my dolly friends having bad experiences in the past with Toys R Us and their preorders. I think dolls started appearing in stores before pre-orders were ever shipped. Please leave me a comment and let me know if you’ve ever done a Toys R Us preorder. Was it worth it? Or did you have to wait too long?

Anyways, what do you think of these dolls? Are you going to get any? Want to wait for my review? I’m definitely getting that Spider Gwen! Leave me your thoughts down below!

Greetings everyone! I’m posting this on Sunday, July 23, 2017. This is the last day for the 2017 San Diego Comic Con and the most disappointing Comic Con for Monster High or Ever After High Collectors.

Since March? April? I’ve been waiting with baited breathe for any sign of an SDCC exclusive. Who would it be? Would EAH be included? I have LOVED all three of my EAH Comic Con Exclusives and was anxiously awaiting word of another amazing doll. There are very few MH Comic Con Exclusives that I am missing, having recently added the original Black & White Frankie to my collection (a dream come true!). So…. I waited. And I waited. And we saw what looked like photos of a leaked Ghoulia doll. (See this photo) Awesome! A Ghoulia! But umm… then no news came. And no news. And then Mattel released all of their SDCC exclusives along with their (TERRIBLE) new webpage. And they weren’t here. In fact, news came as late as this past week that there WAS a planned exclusive (source) that we did see as website exclusives, but they were originally intended for SDCC. According to kataramov on tumblr “the designers of Mattel’s home-grown brands, Monster High included, were crestfallen, but there’s nothing they can do about it. Monster High spent the year preparing for SDCC as usual before the corporate decision was finalized, so they slated reveals, which are now happening on social media, and Becca designed that Cleo de Nile and Ghoulia Yelps 2-pack, which was supposed to be the SDCC exclusive.” So limited MH news that was posted on social media and NO EAH news. We did get reveals each day, for whatever that is worth. Here they are along with my commentary:

We started with a reveal of a ballerina Cleo: I was a little excited about this doll because (a) articulation and (b) cute! but then I started looking more closely. THIS is the first reveal? She has “molded” tights, or at least painted on tights, no paint on her accessories. She’s just not the same quality I expected to see. I mean, go look at the reveals from 2014 or 2015 . Also, where did I go in 2016? Hmp? Anyways. It just isn’t what I had gotten used to.

You know there will be others in this line. In fact, mindose on tumblr has this picture of a Clawdeen material in the same cut as Cleo’s dress. It is more likely you are seeing a test of the pattern on whatever fabric was laying around, but anyways: What do you think? Clawdeen in this line? Or just a test? Who do you want to see ballet-ed up?

Then came the shadow and reveal for some more minis: I will admit, I am NOT a minis fan. I don’t like blind bags in general and these are just kinda small for my tastes. I’m not the biggest fan of the pets, because some of them just get a little too much exposure (I have like 5 Neptuna figures….) Some people were super excited for this, though, some I’m not trying to rain on your parade.

Saturday came around and we got this: Ugh. So I’m a super articulation snob when it comes to MH. That is one of the main things I loved about this line when I started collecting. I can’t explain it. I’m not that picky with my Barbie dolls, but MH is supposed to be that super fun line where they can be freaky fab. This isn’t that. I want to like that little sister. I mean, the fact that her eyes are a reverse of Frankie’s is cool, if not kinda creepy. I want to like little Alivia. (Should we pronounce that like Olivia? or ALIVE-ia?) She’s cute, but like all of the younger siblings, she’s not more than that. I love the Frankenstein-posed-arms, though. Maybe I’ll get her just to see? I found the other individually packaged little sisters at my Wal-Mart recently, and although I walked around with the sea-sister, I didn’t end up buying her.

Lastly, we come to today. Sunday’s reveals are either super awesome or a super let-down. Maybe because they were all not exciting to me, this wasn’t super awesome. The text on the shadow yesterday on Instagram said “We’ve heard your screams mansters & ghouls! So, get ready to howl over tomorrow’s freaky-fierce final reveal!” Really? You heard us? I don’t think so! Okay, don’t get me wrong, I know there are a lot of Howleen fans out there, so that is probably what they were referring to. But I promise no one was screaming for more non-articulated dolls! I promise I get it; adult collectors make up such a small part of the market. In my small town there are 3 other adults ( that I KNOW of) that collect. There are MANY more kiddos. I get it, I promise I do. But don’t those kids like the articulated dolls? I know that those cheaper dolls have their place. I actually really love the Emoji-style dolls that should be around $5. I hate being in the toy aisle and hearing a kid say they don’t have enough money in their tiny little coin purse for a doll. But we should still be getting SOME high quality fully articulated dolls, shouldn’t we?!

There wasn’t a single doll revealed in this SDCC weekend that matches the quality we fell in love with from MH. Not a single one. We have no news of a movie release? No news of other lines? I just can’t get over this huge feeling of disappointment. I’m not trying to be a Debby-Downer. I mean, there is a Ghoulia doll coming out of all of this. Well, maybe I’ll get one. Mattel’s new website ate my order. PayPal still has my money on hold, but Mattel has NO record of an order placed and an email to their Customer Service has so far been unanswered. What about you? Were you excited for any of the reveals? Convince me of your love. I need some MH love right about now.

OMG! I can finally reveal that the 2015 SDCC Ever After High Doll will be Raven Queen as the Evil Queen!

MattyCollector.com reveals:
Ever After High® Raven Queen® SDCC 2015 Exclusive
Raven Queen, The Evil Queen
Raven Queen never wanted to be the next Evil Queen. But she always wondered why her mother tried to take over all fairy tales. By accepting her destiny, Raven may find some answers, not to mention some wicked powerful magic! What secrets lie inside the looking glass? Only the magic mirror knows.

Are you going to SDCC? Will you be picking this doll up? We’d love to hear your ideas about the latest reveal!

I had to work yesterday, so I wasn’t able to post the action as it was happening. Check out all of the great reveals that Thursday had to offer: END_OF_DOCUMENT_TOKEN_TO_BE_REPLACED

Posted on mattycollector.com on June 4th, 2014
By Tara Z.

Ever After High™ Cerise Wolf™

According to the fairytale, Red Riding Hood is a wide-eyed, carefree girl. Yet there’s something different about her daughter, Cerise. Ever the mysterious lone wolf, Cerise wondered, “What if I didn’t have to follow in my mother’s footsteps? What if I could let the world know my family secret? What if….

Here’s how to get this figure for your own collection!

Before SDCC, pre-order at MattyCollector.com and pick upONLY at SDCC:

After SDCC, order through MattyCollector.com for shipment domestically and internationally at our SDCC After Party sale: