I haven’t purchased a MH doll at retail since I found Slo Mo in March, and before that was December! I was beginning to wonder if MH had run its course with me, but after today, I’m not worried anymore.

My Toys R Us put out the Zombie Shake dolls a little early, like most stores. There isn’t anything on the box or case that marks these dolls as having a special release date, but the TRU computers will kick your purchase out. I had to get a manager to allow me to purchase them. They had already sold two sets the night before, and that’s what forced them to sell mine to me.


First up is Venus! 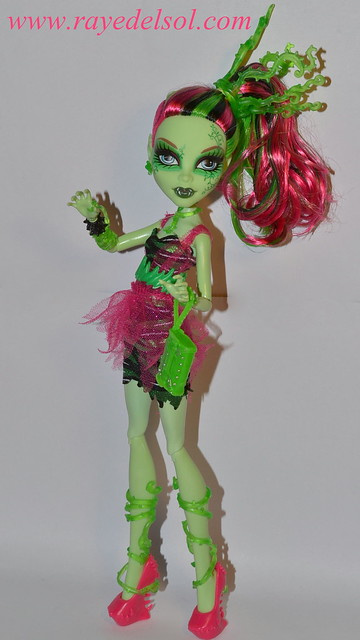 This is the #1 Zombie Shake doll I wanted! I’ve been looking forward to her the most! 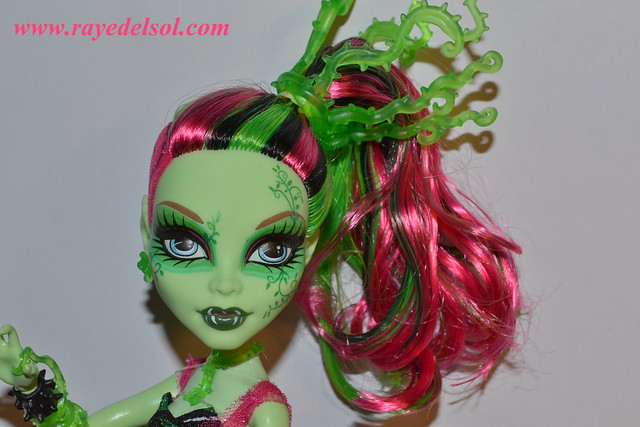 Venus’s face has vines and leaves scrolling across it. She has green eyeshadow and dark green lipstick. 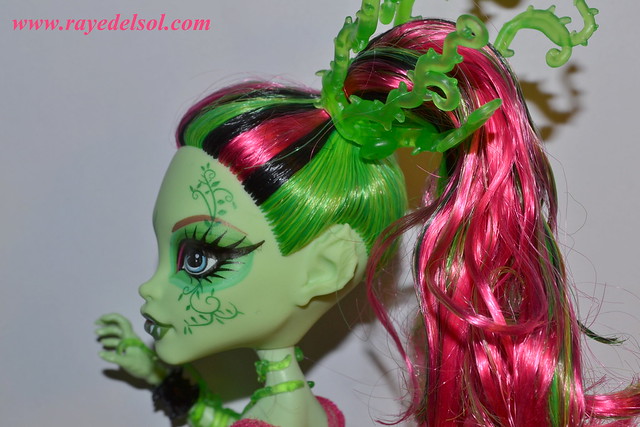 Her hair is pulled into a ponytail. She has a green vine plastic hair holder.
The ZS Venus has pink and green hair like normal, but also has some black streaks! I love it! I’ve already taken her hair down and run some water over it, so this is not how she comes in the box. My Venus had poofy hair and it was just crazy. I had to do something.

Also of note – this Venus features the same soft kanekalon hair that we are used to from Venus dolls. I LOVE it! I collect all of the dolls with kanekalon hair!! Ghoulia, Spectra, and Venus are dolls I will collect until the end! That super soft hair is what drug me in to being with! 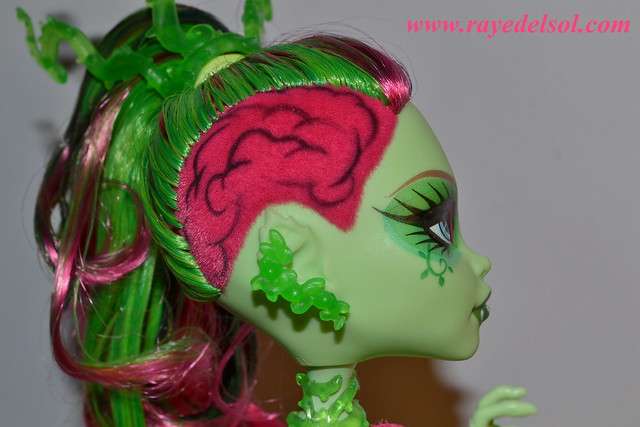 Look at her brains! I absolutely love this! She only has one earring and it goes up her ear. 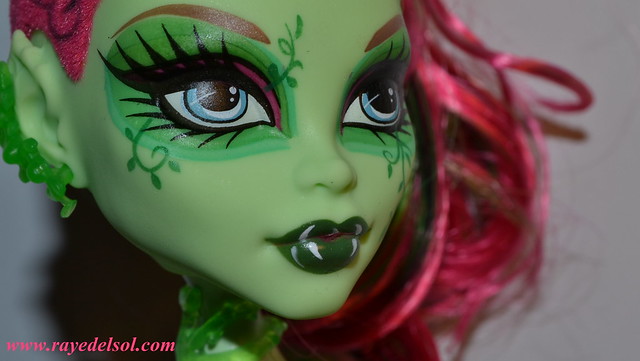 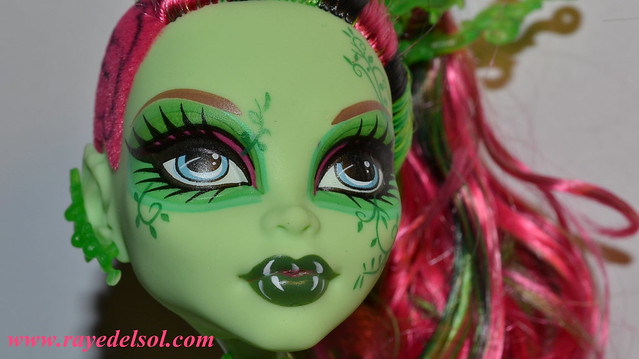 My Venus doll has hints of pink lipstick in the middle. I don’t know if this is a feature on all ZS Venus dolls, or if my doll is special? 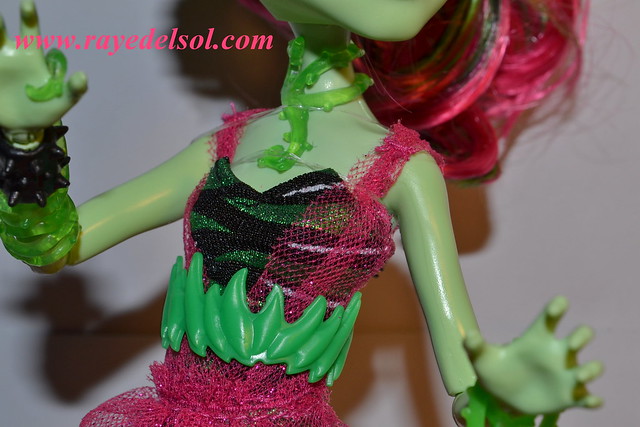 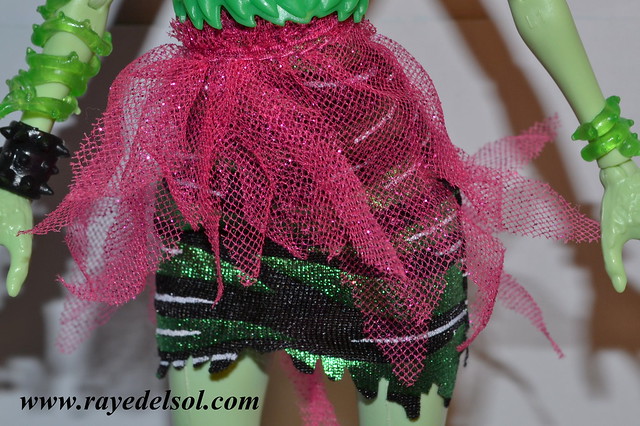 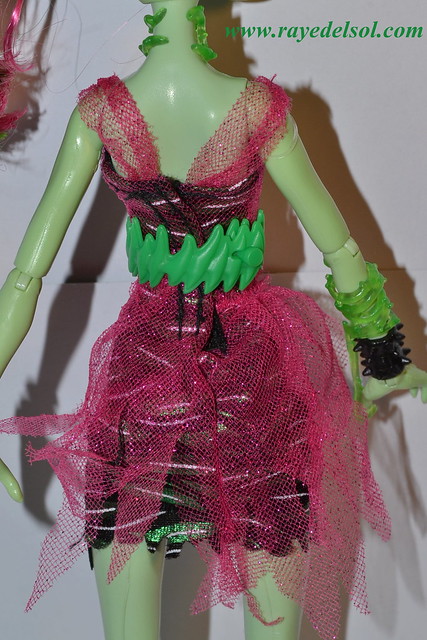 Venus’s dress is a strapless black dress with green stripes. There is an overlay of hot pink mesh on top of the dress, creating straps. The entire dress is one piece, however. 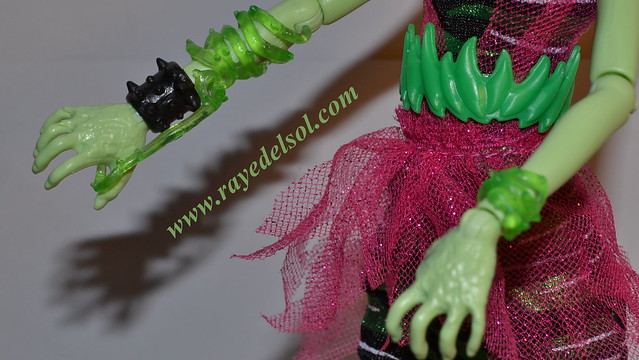 Venus has vines on her arms that create little bracelets. One extends to her hand, creating a little ring. On that hand, she wears a black bracelet/cuff. 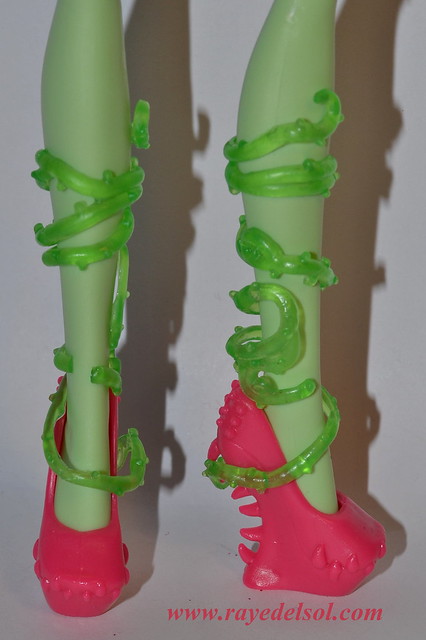 Venus has vines on her legs, as well. I can’t wait to get an I <3 Fashion Venus and change these vines out. I believe the black vines that the Fashion Venus comes with will be a better match for this doll and her theme. 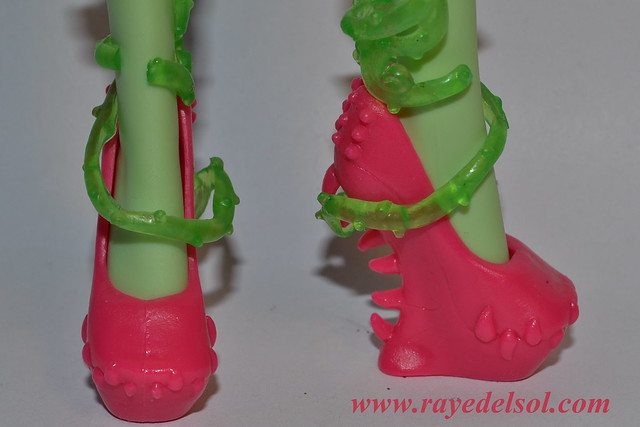 Venus has bright pink shoes with what looks like teeth and thorns. 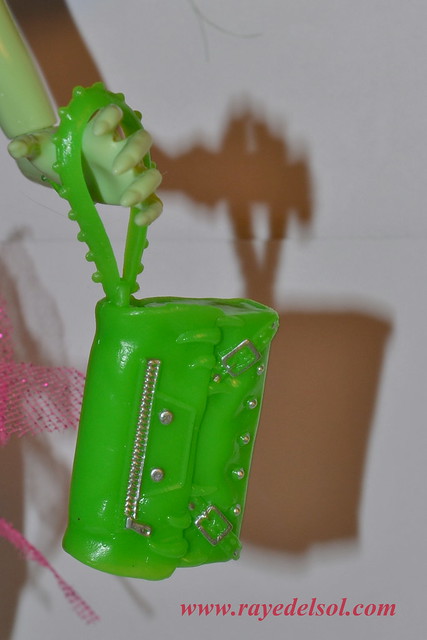 Venus’s purse is bright green with teeth and spikes. I LOVE that the purse is accented with silver paint! Thank you, Mattel, for not skimping on the details! 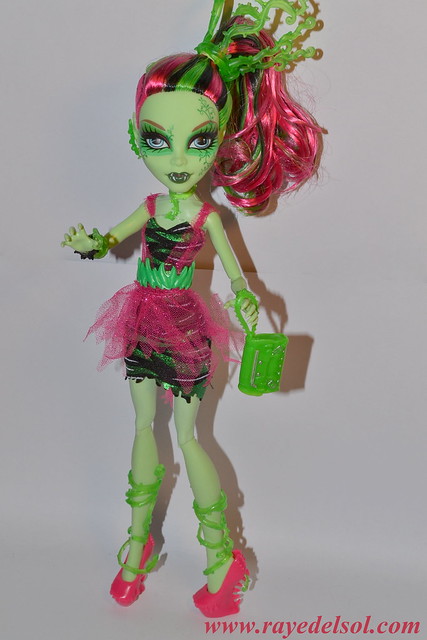 And that’s Venus! I’m a huge Venus collector! I have one of each release (except the variant Swim Class with the dark pink make-up) and I can’t wait to keep adding her to my collection! 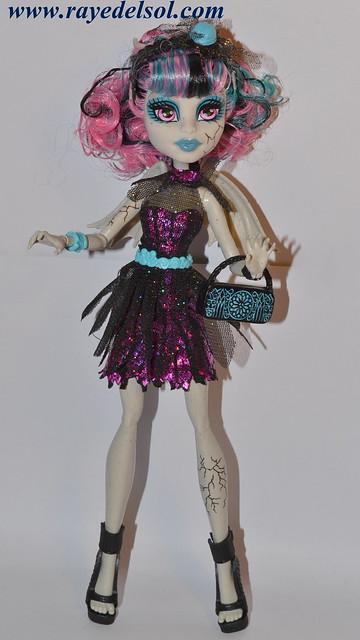 The other doll in the box is the Rochelle doll. Since these dolls have been released, I wasn’t convinced that I would keep Rochelle. She is a beautiful doll, and will probably be staying. 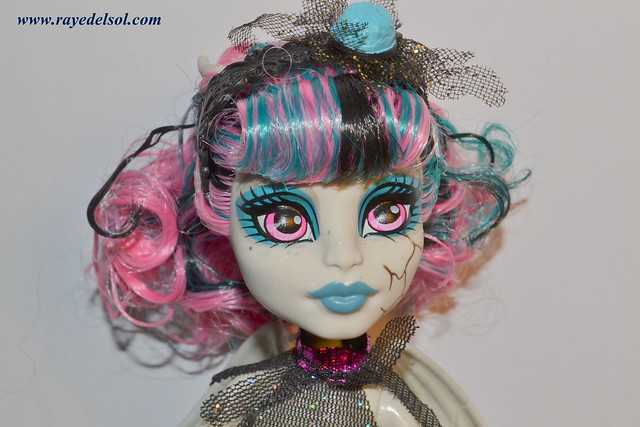 Seriously. Look at this face! She has bright blue eyeshadow that matches her lipstick. She has black streaks in her hair and some of her cracks have been accented in black. 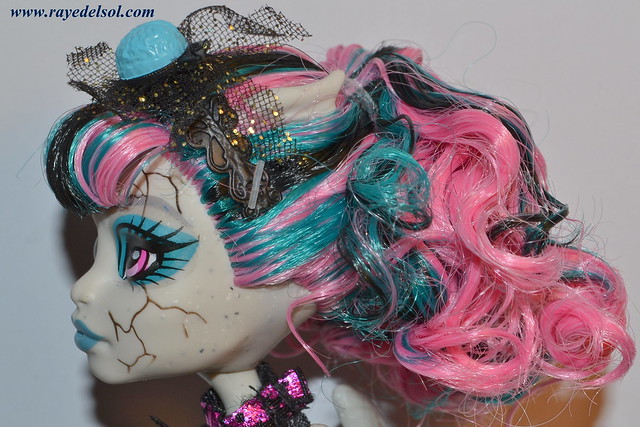 I’ve already put her hair through a light misting with water and brushing. Originally, her hair was sticking up from being in the box. I love her curly hair, because this is exactly how my hair looks in a ponytail (minus the pink/blue/black part) 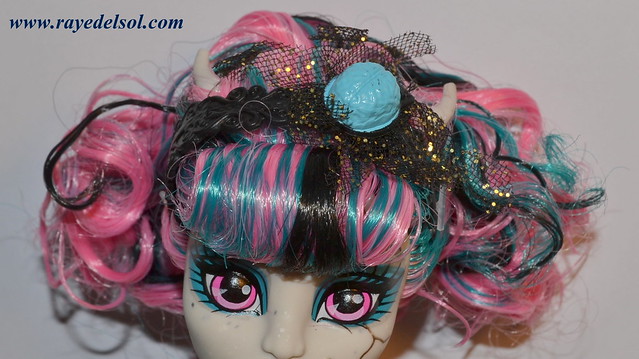 She wears a black headband that features a light blue brain! 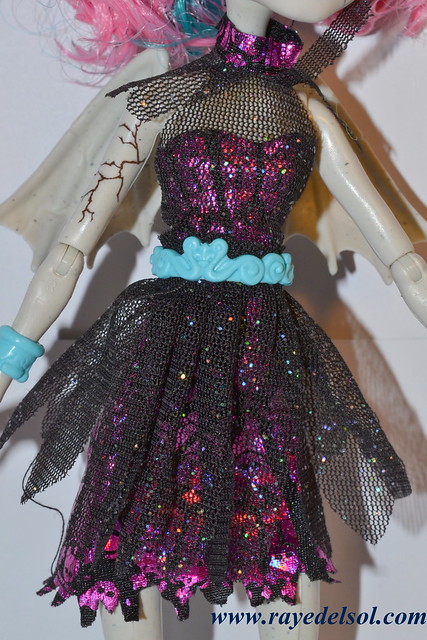 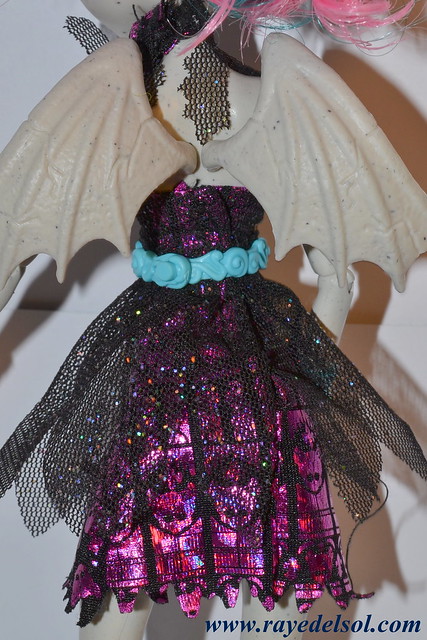 Rochelle’s dress is black and pink/purple underneath with a black mesh top that creates a halter. She wears a light blue belt that looks like waves with a small crown in the center. 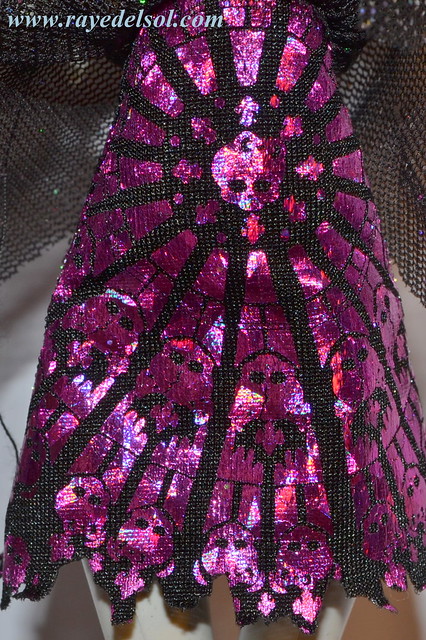 Under that mesh is this very busy print! 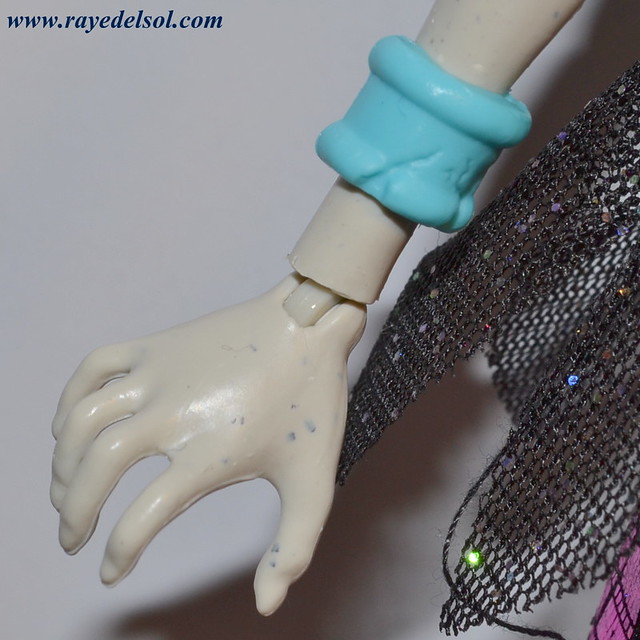 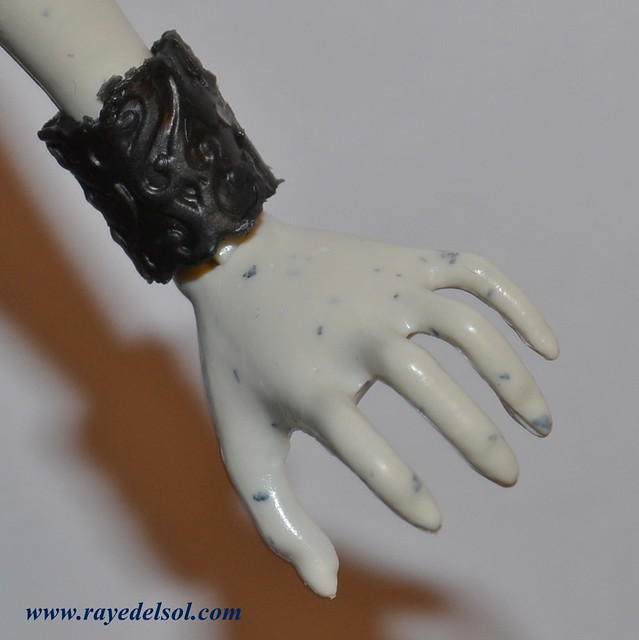 Rochelle wears two different bracelets. On one side she wears a light blue cracked bangle. On the other arm she wears a black scroll bracelet similar to her other dolls. 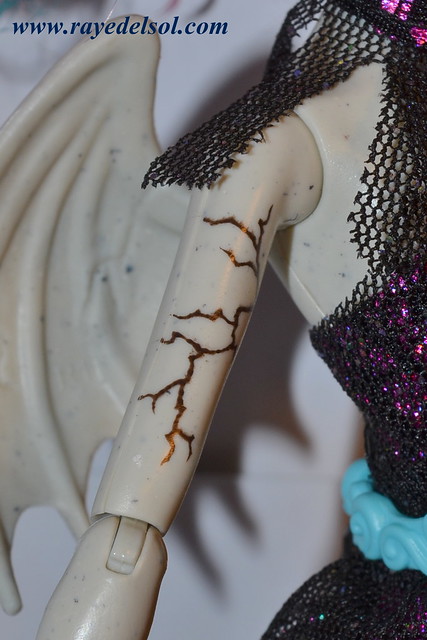 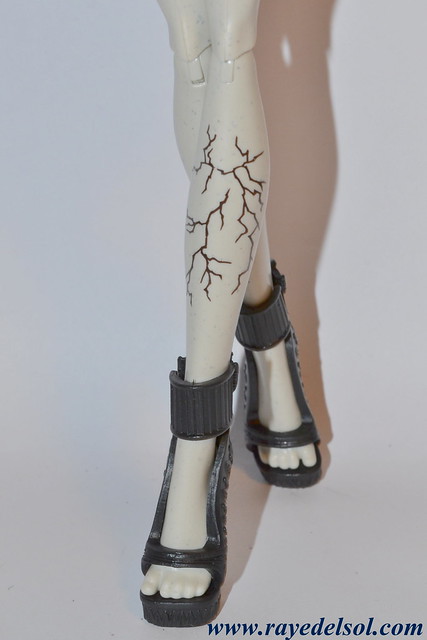 My favorite part of this doll are the multiple places where she has black cracks! 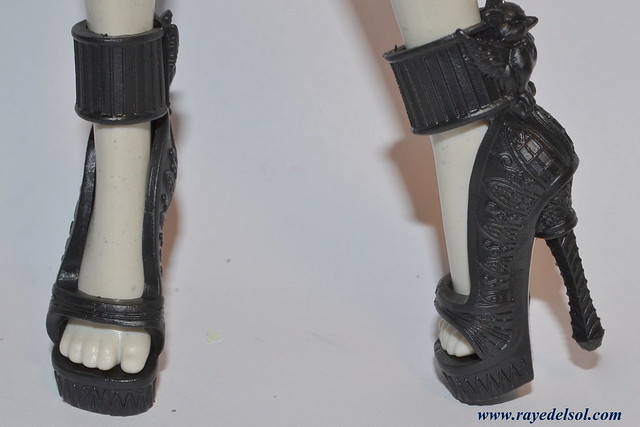 Rochelle’s shoes are all black. They resemble her signature shoes, but are different. The actual shoe looks like a cathedral with the large windows. 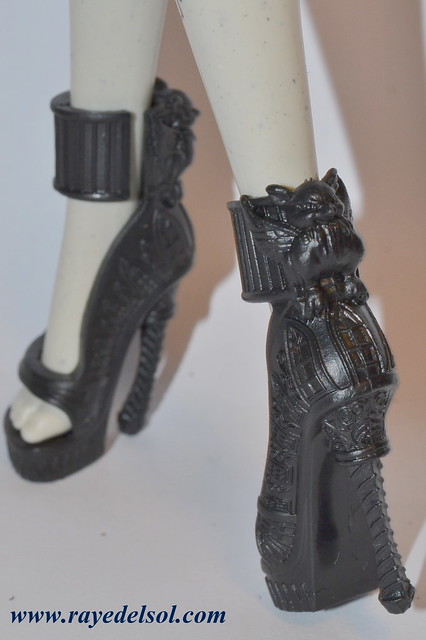 The straps of her shoes features a small creature (similar to her pet, a gargoyle griffin named Roux). 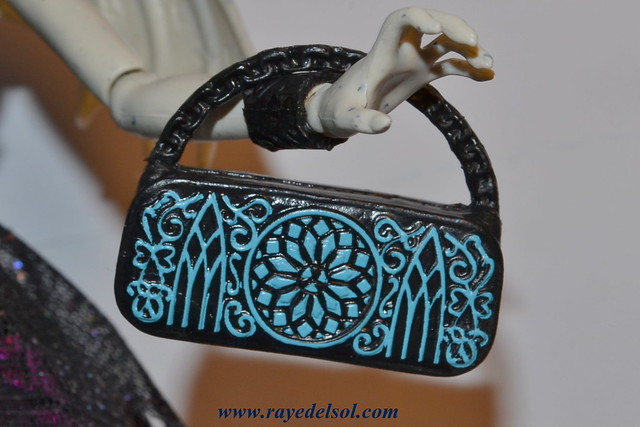 Rochelle’s purse is also a nod to the large cathedrals of Scaris. The detailing is highlighted with light blue paint. 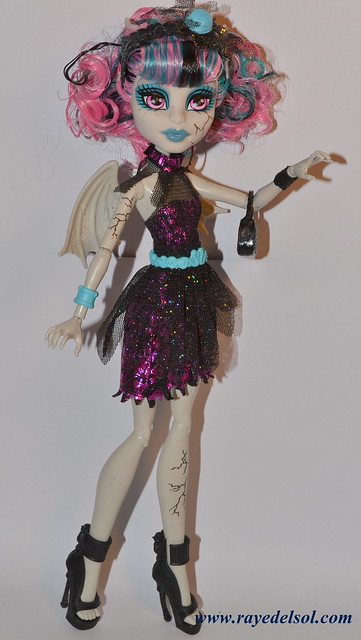 And there she is! Rochelle!

I also purchased the Zombie Shake Werecat Twins pack. I’ll take photos and review them at a later time. If you find both packs and only have the money for one, I’d recommend purchasing the Rochelle/Venus pack. You get two very different dolls with great details! I’m happy with my purchase!

One thought on “Zombie Shake Venus and Rochelle”